UK Threatened Species in the NW:

World Museum holds one of the largest for UK Caddis early stages.

The region’s caddisflies (Trichoptera) are an important component of most unpolluted freshwater sites. That includes those that dry up over summer and even mildly brackish pools.

The region has three major rivers, Dee, Ribble and Lune. The Meres and Mosses are the most important still water sites. Reservoirs and restored industrial sites are other large open water areas and the abundance of marl-pit ponds provide smaller still waters. There is little upland habitat.
Spring streams that deposit calcium carbonate are an intriguing niche.

Caddis recording has been dominated by three people or groups. Alan Brindle, based at Manchester Museum, during the 1950s and 1960s ranged widely but concentrated in our region on south Lancashire; Ian Wallace based at World Museum Liverpool from 1980s to 2000 worked in our region mainly in Cheshire; the Environment Agency routinely surveys a range of rivers and streams as part of water quality checks and identifies the caddis as they are significant in assessments.

Are caddis worth recording?

The Environment Agency concentrates on running water sites so there is little widespread modern recording. Most records are as larvae and there are cheap identification keys available. The big increase in recording is as adults taken as a by-catch in moth traps. Unfortunately there is no photographic guide to live adults, but one is in preparation. There is a cheap key but it is designed for use with preserved specimens, and beginners can find its approach daunting. Fortunately, the caddis recording scheme verifies records submitted by the iRecord route which is a good way of data getting into the system for national and local use.

All data is useful, but it is especially worthwhile collecting specimens from sites of general nature conservation interest or which are infrequently studied due to their privacy or remoteness. Garden traps tend to record widely dispersing and thus widespread caddis but have shown the spread in our region of a few species. Of general areas, remote Bowland deserves attention. Of habitats, calcium carbonate depositing streams are always worth a look.

Barnard, P. & Ross, E. (2012). The adult Trichoptera (caddisflies) of Britain and Ireland. Handbooks for the identification of British Insects 1 (17).

Edington, J.M. & Hildrew, A.G. (1995). A revised key to the caseless caddis larvae of the British Isles with notes on their ecology. Scientific publication of the Freshwater Biological Association 53.

Wallace, I.D., Wallace, B. & Philipson, G.N. (2003). A key to the case-bearing caddis larvee of Britain and Ireland. Scientific Publications of the Freshwter Biological Association 51.

Report on surveys for the stonefly Isogenus nubecula Newman and the caddisfly Ylodes simulans (Tjeder) in the River Dee, Cheshire in 2018 and 2019
Ian Wallace
Download

Studies on the rare caddisfly Anabolia brevipennis (Curtis) in Cheshire, in 2018 and 2019
Ian Wallace
Download 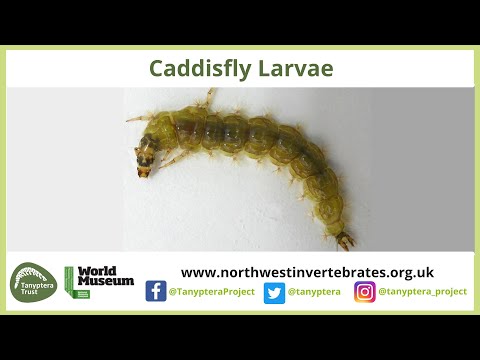 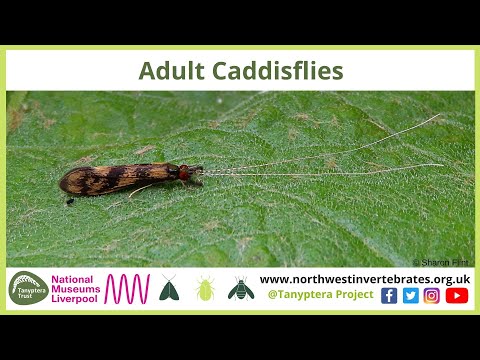 Ian Wallace & Sharon Flint give an introduction to Adult Caddisflies and discuss the upcoming release of their new guide. Includes a question and answer session.